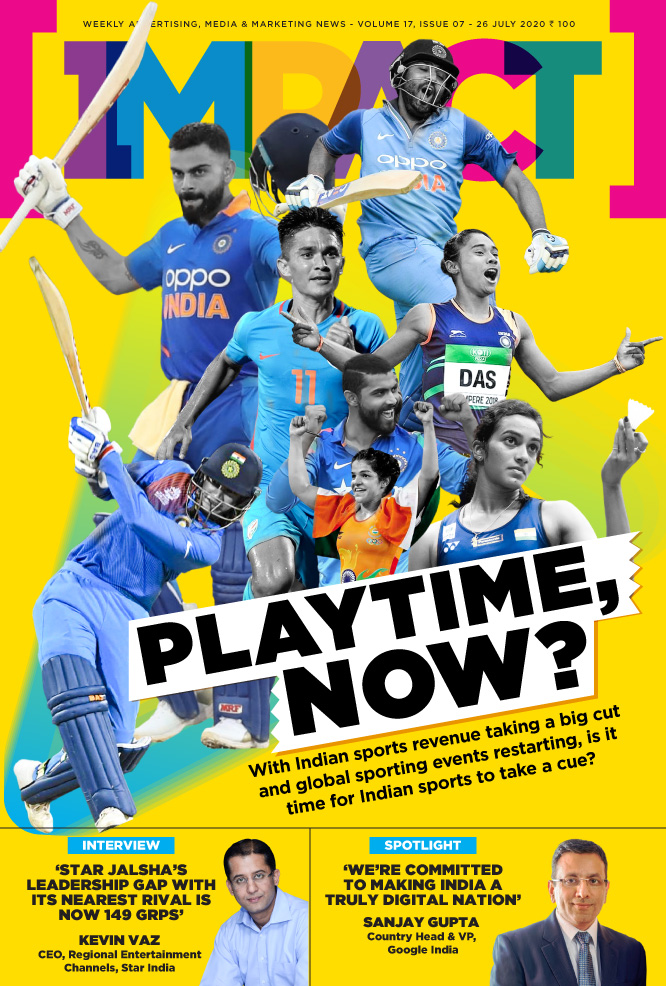 I started working with Brahm Vasudeva in the first quarter of 1986. We worked together as client-agency for 34 years, and this continues. As an individual to individual relationship, this must be among the longest in the business. During this period, we nurtured a bond that is hard to put in words.

I want to focus on one abiding quality in the man, which helped him build his business and defined him in so many ways. It endeared him to me. It is a central characteristic of the man. Brahm Vasudeva was fearless. He was about doing the right thing. If it meant fighting for it, so be it.

My mind goes back to 1993-94. The availability of data about readership of print media, and viewership of TV channels, had dried up. The attempts with conducting the National Readership Survey regularly had failed, as that media research activity had stopped. Brahm was a big believer in the power of advertising. His Hawkins brand was built on the back of focused advertising investment. The unavailability of media data meant his advertising investment was not directed properly. Repeated attempts to get the industry bodies to address this issue had failed. The larger print media publishers were content to let this situation continue.

Brahm voiced his frustration in various forums. He was joined in this by Roda Mehta, an outspoken media veteran from the advertising agency Ogilvy & Mather. Enough talk, the two decided. They started to gather together a group of other like-minded people. The two took me aside and spoke to me in an industry gathering. I agreed with them and joined their informal band. K Kurien of Radeus advertising, another upstanding professional, came in. Slowly and steadily the group expanded to perhaps 10 or more people from different companies.

The leadership for this was all Brahm, with Roda as a joint commander. The meetings took place in the Hawkins office in Cuffe Parade. We worked for days on end, putting together the framework for a new Readership Research Users Council. The name was soon changed to Media Research Users Council. Brahm wrote the constitution which continues till date. There would be four constituents – advertisers, publishers, agencies and broadcast & other media. Each would have equal representation in the Board. The Chairman of the Board would rotate among the four. It was the right thing for all sections of the industry. It was fair, balanced and inclusive. That was the problem with it, in the eyes of some.

Undaunted by earlier failures, we went to the industry bodies, viz., Indian Newspaper Society (INS), Advertising Agencies Association of India (AAAI) and the Indian Society of Advertisers (ISA). Brahm and Roda explained what was being attempted. We invited the support of all. This was an industry initiative for all the constituents. Everyone would benefit. The ISA decided not to be a part of it; they said that this is for the media owners and agencies to sort out. The INS and AAAI took umbrage, and decided to block out the yet-to-be-formed MRUC. The INS members wanted control of the data. Under the proposed structure, this was not possible. The AAAI wanted to be a prime mover of any such activity. Under the new initiative, they really had no role.

Brahm was frustrated but not discouraged, as were all of us. We really wanted a fully representative group to come together. We had good intentions and plans, but no money. We huddled again in Brahm’s office. After some discussion, we decided to move forward undeterred. The MRUC would be formed and launched, and we would appeal to the individual companies to participate and become members. Eight of us signed on as individual promoters of the MRUC, two from each category of membership. Brahm Vasudeva reluctantly became the first Chairman of MRUC.

It is a truism that when one starts walking, one discovers new paths and solutions. The newly formed MRUC decided to approach the research agencies for support in conducting the first Indian Readership Survey. We invited proposals. We felt that if we went to market with a defined product, we could garner subscriptions. We found a believer from an unexpected source. Ashok Advani of Business India was then the owner of ORG MARG, the research agency. He agreed to vendor-finance the IRS, and start the work. It was a Rs 2 crore project, a big risk for him and for us. Ashok was an entrepreneur. He put his faith in the MRUC team, led by Brahm. He assessed that this team would come good.

We launched the first IRS. I was asked to head the Marketing Committee. The MRUC team spent days on end and cleverly designed the offer. We sent out more than a hundred individual appeals to advertisers, agencies, publishers and other media. Despite an active lobby against the MRUC, we received subscriptions worth over Rs 60 lakh within a month. The game was on. Over time, we raised all the money needed to successfully fulfil the obligation to ORG MARG.

Those were heady days, with a great team pulled together by Brahm. There was no personal agenda. The team chased an idea, and wanted to see it come alive. It took the fighting spirit of someone like Brahm to pull it together. He was not trying to show up anyone. During the process, he never spoke ill of anyone. He stayed focused on the task, and got it done. He went about the work as seriously as he went about dealing with his business and other matters. No short cuts. Always the worker.

The MRUC has completed 25 years of service to the industry. Brahm Vasudeva gave it around 10 years of his life, before he withdrew. His name is nowhere now. He couldn’t care less. That was another trait. He was not in it for the personal limelight.

There was much to learn from Brahm. I have seen him lead his team to great success in his business. That is another story. Fighting to do the right thing came naturally to him. He couldn’t see it any other way. The beauty is, he never thought about it.

A DOYEN OF THE INDUSTRY

Brahm Vasudeva, Non-Executive Chairman of the Board of Directors of Hawkins, passed away on Friday, July 10, 2020. He was a doyen of the industry and highly respected and admired for his innumerable contributions to the advertising community over several decades.

In 1984, Brahm Vasudeva took over the management of Hawkins from his father, the late H.D. Vasudeva, who stepped down 25 years after founding the company, and handed over the reins to his son. Brahm Vasudeva had been working at Hawkins since 1968 as Vice-Chairman and Managing Director. After 38 years of distinguished service to Hawkins as the Chairman and Managing Director, he retired on April 25, 2006, the day before his 70th birthday. Post that, he was the Non-Executive Chairman of the Board of Directors at Hawkins.

A statement from the ISA pays tribute to Vasudeva, an astute advertiser: “Brahm Vasudeva was a pillar of strength, stickler for perfection and a great source of inspiration. It is a matter of pride and significance to the ISA that he served as a member of our Executive Council for a continuous period of 47 years. We at ISA will certainly miss him a lot. In this hour of sorrow, we pray for his soul to find eternal peace and tranquility.” THE INDUSTRY HAS LOST A REAL STALWART: SAM BALSARA

“I am saddened to hear about the passing away of Brahm. What a fine gentleman he was and the industry has lost a real stalwart and staunch loyalist who always spoke up in impeccable English on all issues that he felt strongly about. He articulated his thoughts well and presented a compelling reasoning.

He was a founding member of ASCI and I believe he had written the Code that we follow till today with some additions and modifications, of course. He was also the founding member of MRUC and played a leading role in ISA. He will be missed in industry matters,” Sam Balsara, Chairman of Madison World, told IMPACT. “I had last met him at the Subhas Ghosal Memorial Lecture, where Uday Shankar spoke, and he did not look too good then. He will be sorely missed in industry circles. May God give his wife and his daughter, Gayatri, as well as other family members the strength to bear this irreparable loss. May his soul rest in peace.”

“Brahm was someone who had a keen eye for detail, an insistence for perfection and a mastery over the English language,” recalled Ramesh Narayan, founder of Canco Advertising. “His insights at industry meetings were always something I looked forward to. Behind the formidable exterior was a very kind person who could shift from raconteur par excellence to serious advisor without batting an eyelid. His contribution to many industry bodies like IAA, Ad Club and ASCI has been significant. And, of course, he presided over a company which made quality products. An Indian pressure cooker was even placed in the Museum of Modern Art, New York. Something you would almost expect from the man.”

HE WAS LARGER THAN LIFE: AMBI PARAMESWARAN

“Brahm Vasudeva was a rare CEO who loved to engage deeply with advertising issues. Though he was the MD of a very large company, he always took the time out to attend all key advertising industry events,” said Ambi Parameswaran of brandbuilding.com. “I remember when we were redrafting the Memorandum and Articles of the Advertising Club 15 odd years ago, we did not want to present it to the General Body before we got a few seniors on board on the changes we were making. We invited Brahm Vasudeva for a one-on-one. As expected, he asked for the draft before he came for the meeting, and brought his copy of the draft with numerous corrections including some 'typos'. We were totally blown away by his commitment to the job at hand. Fortunately for us, he agreed with all the major changes we were making and the final M&A of the association was passed unanimously at the AGM, where he was present. Well before the current COVID-19 paranoia about social distancing, Brahm Vasudeva never used to shake hands. It was always a 'Namaste' for him. Larger than life. We will miss his presence. RIP.”