Few in the Indian media industry have credentials that last as long as Sri Adhikari Brothers, which completes a decade of the music channel Mastiii and 20 years since launch of SAB TV, which was founded by them in 2000, and later sold to Sony Pictures Networks India.

Over the past few decades, the Sri Adhikari Brothers (SAB) Group has given the Indian media and entertainment industry a dose of many firsts and superlative successes. The list would be too lengthy to enumerate here, given that they have contributed to almost all media verticals including production of TV shows, digital shows, print & publications, movie production, movie distribution and syndication, and of course broadcast of both News and Entertainment channels, among other ventures.

Ten years of Mastiii have been second to none. Over the last five years, it has claimed the No. 1 position in 73% of all weeks in an extremely competitive music genre, and top slot in 61% of all weeks over the past decade. Few channels can boast of such dominance over such a long period of time. On the performance of Mastiii, Markand Adhikari, Chairman, SAB Group, commented, “Today, I feel very satisfied to learn that our channel Mastiii enjoys such strong loyalty of our consumers.”

On the occasion of completion of 20 years of SAB TV, which was launched by Sri Adhikari Brothers and is now under the umbrella of Sony Pictures Networks India (SPNI), Adhikari said, “Over the years, as a broadcaster starting with SAB TV to eventually launching Mastiii, we have started 10 channels across genres. We’re very happy that each one of them has done extremely well. Not to forget that SAB TV had created its own niche under the Sri Adhikari Brothers regime and then become a part of Sony Pictures Networks India, under the very able leadership of NP Singh, CEO, SPNI, who has taken the channel to be the most watched comedy channel in the world and a very commanding position despite today’s challenging times.”

Remembering his late brother, with whom he started the media journey in the 1980’s, Adhikari said, “I fondly remember my beloved brother, the late Gautam Adhikari, as we complete yet another landmark in a journey that we set out on with a big dream and unshakeable determination. For us, it was never about how long the journey might be, but about creating entertainment that India
would want to see and brands would want to partner, day after day, week after week. Just counting these days and weeks, it is incredible to imagine how long it has been, because it only feels like yesterday when Gautam and I started our broadcast journey.”

ON BEING A BROADCASTER AND MEDIA OWNER FOR 20+ YEARS

We have been in the industry for the last 40 years and, of course, in Broadcast for the last 20 years. The journey started with SAB TV. We as a country are still young in the Broadcast sector. So, we have a long way to go. One thing is sure - traditional television is here to stay. We as a country are very family-oriented and since many years, we have nurtured this institution of family. TV is a part of millions and millions of households and watched with family over dinner or otherwise. It is here to stay because I don’t think content on the web is watchable by a family together.

Though Print is dying and Digital is taking its place – with the lockdown hastening this process – it’s still the habit of most Indians to read a newspaper with a cup of tea or on the toilet seat in the morning. In the West, newspapers are still respected as opinion-makers.

At present, the big screen is in the doldrums, which is not a very good sign. Those who consider themselves big screen stars and ridicule the small screen actors are today sailing in the same boat.

A major part of the future plans of the SAB Group involves Digital. Our next generation - Ravi and Kailash Adhikari – have started with ‘Dheet Patangey’, a web film that premiered on Disney+Hotstar on March 2, 2020. They have many other films and web series lined up.

Like other publications, our magazine ‘Governance Now’ has also migrated to Digital, and now even events are Digital. Digital is infinite. So, you will see lots of competition in future as media becomes a technology play and participation of consumers increases by leaps and bounds. MEET THE GAME-CHANGERS IN PITCH MARKETING 30UNDER30 HOW MEDIACOM IS WINNING WITH INTEGRATED SOLUTIONS 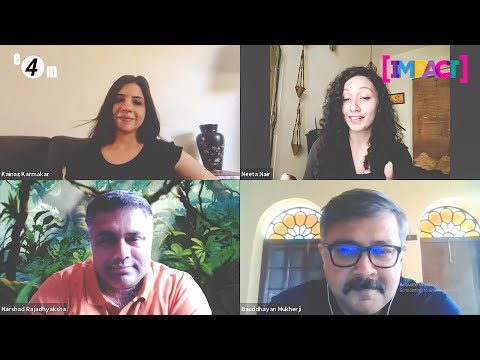