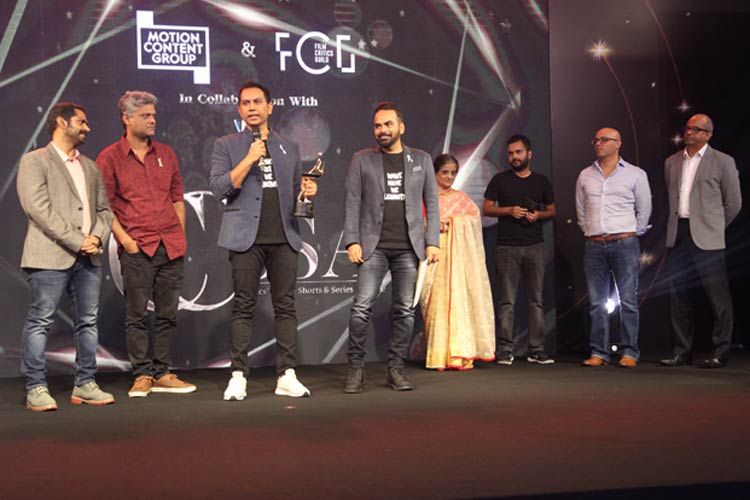 Motion Content Group, the global content investment and rights management company, of GroupM and Film Critics Guild in collaboration with Vistas Media Capital initiated the second edition of the Critics' Choice Shorts and Series Awards (CCSSA). The awards aimed at recognising talent across various genres in terms of short films and webseries.

CCSSA honoured 19 winners from 92 nominees in 7 Short Film and 12 Series categories. On the CCSSA initiative, Prasanth Kumar, CEO, GroupM South Asia, said, "In 2019, over 300 million people in India have watched digital content. At GroupM, we have always collaborated to bring alive stories across genres of various brands. Through CCSSA we have recognised the best talent in storytelling across short films and webseries. It is an important contribution to celebrate storytelling through these awards."

While CVL Srinivas, Country Manager, WPP India, said, "The fact that it is a critic's choice award makes it very credible. Motion Content Group has been leading the space of trying to unearth the talent in the content space and ensure they get a platform to do well. We are very excited to be a part of this initiative."

Speaking about the idea and partnerships, Ashwin Padmanabhan, Head Trading and Partnerships, Motion Content Group, said, "We are a worldwide company and we work with different platforms across the globe like Netflix, Amazon and BBC. In India we are just two years old and we have started with some of our own IPs. From our first investment in a chat show to now when I look back in these two years, we have grown to almost 20 shows across television and OTT platforms. It has been a good scale of growth for us as we have strategic partnerships with Viacom, Sony, Sun Network and many more. We have been able to bring in and bridge the gap between content creators and platforms and give them a solution for creative ideas as well as a medium to monetise it. It is an end to end solution that Motion Content Group provides. It gives us the opportunity to get good creators on platforms and help them create better content."