CREATIVE AGENCIES: PITCHES, FELLOWSHIP AND ADVERTISING IN THE TIMES OF COVID-19

Two weeks ago, I was in the middle of a meeting with the head of an independent creative agency when he got a call about one of his clients cancelling an ad shoot in a different part of the country. Half an hour later he was busy responding to employee concerns about the COVID-19 panic engulfing the world, which had now hit closer home. He was definitely worried because neither he, his employees nor the agency had the systems in place or the wherewithal to work from home, or so he thought at that point. Cut to a week later, all agencies big and small, were by default telling employees to not come to office. 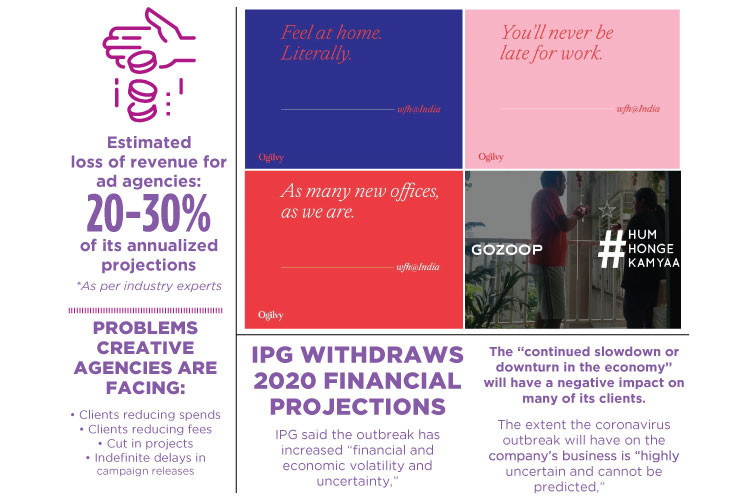 The Association of Advertising Producers (ASAP) along with other industry bodies - IFTDA FWICE, WIPFA, IMPPA, and IFTPC – called off all shoots between March 19 to the 31 due to the spread of the coronavirus. States were declaring Section 144, (and now the 21 days lockdown) restricting all but essential travel, and soon after agencies perhaps for the first time in history were unanimously working remotely, discovering novel ways to tackle system roadblocks. After all, necessity is the mother of all inventions they say. A couple of days later, Ogilvy brought out a series of morale booster ads widely circulated on social media on the upside of WFH.

Kainaz Karmakar, CCO, Ogilvy says, “WFH is not a new concept for advertising agencies. What’s new this time are the circumstances and the indefinite duration. Add to that the fact that one can’t go for a walk to clear one’s head and one can’t go to a third space like a cafe. Having said that, we believe our agency is doing a very good job of it and we are saying this absolutely objectively. We are amazed at the discipline and dedication of people, across levels and departments. Creative departments usually have the most tarnished reputation in these matters. Well, our people will surprise you. They are meeting deadlines, discussing pitch strategies and creating the finished work!”

Adding to that Harshad Rajadhyakasha, CCO, Ogilvy says, “They are finding novel ways to execute ideas for clients - Print ads which can be executed from home, animation that can be done from home, recordings that can be done from home and digital work that can of course be done online. Of course, we miss in-person brainstorming and eating out of each other’s tiffins! But ‘Zoom-stormings’ have become the norm with your entire team or clients filling up your screen. It adds a nice touch when someone’s toddler or a pet wants to join the discussions! But hey, these are times unlike any other. So, group lunches can wait. But the work has to go on. And contrary to what one may assume, everyone’s putting in far longer hours working from home than one expected!”
For another creative head, who by his own admission was flying three cities and taking six flights almost every week, being ‘grounded’ has presented a different side of the world.

Azazul Haque, CCO, Mullen Lintas explains, “Offices and workstations were shifted to homes last week. Advertising firms have the benefit of working from anywhere as thought collaboration and ideation can easily be done over video calls. So work output hasn’t suffered much. We are managing pretty well from home. Even client meetings are happening over video calls. I made my career’s first new business pitch over a video call and it was pretty effective. So, advertising work output won’t suffer from lockdowns apart from film production. That’s taken a hit.”
For some others, WFH has increased productivity. A creative head of a top agency in the country who didn’t wish to be named says, “We are a notoriously lax industry, so to ensure safety and to keep people at home we gave away laptops even though internet speed is still a challenge. Yet work is productive, and I can do four meetings instead of two. We had meetings planned for three weeks in advance, so we are doing those presentations on films, stories and ads. Yes there are clients who are asking how they can help people during the pandemic. However, we have not pitched in the last two weeks. This lockdown is giving us time to sharpen and polish our ideas.”
But these are network agencies. Are the challenges of independent agencies any different at such difficult times, and what kind of revenue loss are they staring at?

Raj Kamble, Founder and CCO, Famous Innovations responds, “Since we don’t have global alignments like a big network, our clients are local clients and they are also going through the same issues that we are. I’m confident that in this time clients and agencies will stand next to each other, they understand our situation better and I assume they will be with us. It’s hard to estimate the revenue hit right now, but all our clients are more than clients, they are our partners and I’m sure they will stand with us. We weren’t in the middle of any pitches but a few new projects that were to be initiated have been postponed.”
Agencies, big and small, independent or those under holding companies are facing an uncertain future. Some say perhaps they will recover the losses incurred in the second part of the year, when the agencies, marketers and the campaigns are back with a bang. But right now with production, supply chain, procurement, pricing etc. taking a hit, and its cascading effect on agencies, the sentiment is bleak. Add to that the fact that creative people are not designed to be shut in rooms and stare at screens. But they are reorganizing themselves and their systems and also supporting each other in a big way to tide through the crisis. Yet the impact on business will be huge.
Industry experts are saying that between clients reducing spends, reducing fees, cut in projects, indefinite delays in campaign releases, creative agencies are expected to witness 20-30% drop in estimated annual revenues. The quarter will look worse obviously but things will get better if the industries which lay low in this period spend heavily later. On the one hand, retainers continue but agencies dependent heavily on badly hit industries like travel are expected to suffer more.

But looking at the bright side, at a time when selfishness is visible in the empty shelves of grocery stores, agencies like Bang in the Middle are showing their large heartedness with social media posts by their CCO, Prathap Suthan which goes like this ‘As someone who leads an indie agency, I promise that I will not take on any new client or any brand that wants to move because the incumbent agency has been unable to deliver regular work across these days.’ Well, we can’t foretell the contagion rate of COVID-19 virus in our country, but we can genuinely
hope that at least attitudes like these become ‘contagious’ in such testing times.